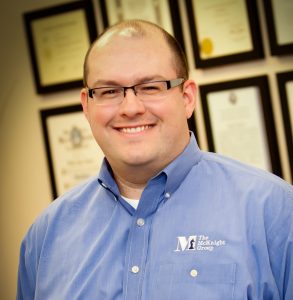 It’s officially been 50 years since The McKnight Group started in September 1970. We are commemorating our anniversary with a podcast that shares the group’s church building history and stories of the company. In this post, we introduce the second of two men who are key to the second generation of leaders at The McKnight Group: Philip Tipton, our Vice President of Architecture.

Getting a Very Early Start in Church Design

Philip Tipton is from a family that has often received God’s calling. He’s the son of a pastor and many of his family members have been pastors and foreign missionaries. That wasn’t Philip’s calling, however, and his family didn’t push him into ministry. In Philip’s words, “My parents really just wanted me to do what God wanted me to do, whatever that was.” For him, that was architecture. In our podcast, he shares how: “I was doing a lot of sketching and drawing as a kid. I actually had a Bible that had diagrams of Solomon’s temple and Herod’s temple and drew those temple designs over and over and over, dozens of times, as a little kid. Even all the way back then I was interested in church design.”

Fortunately for Philip, his high school had an internship program where students could spend time in the office of a profession that sparked their interest. At the time, his father was having some building design done at The McKnight Group, and that led Philip to spend three days with the McKnight Group architects—days that just reinforced his desire to get into church design.

Learning about Church Building from the Ground Up

Philip shares his process of finding the right college in our podcast, and you can hear him tell that story there. He decided to study at the University of Cincinnati, and their six-year program included alternating quarters of internships and coursework. He approached Homer McKnight and asked about working in the office, but Homer suggested that Philip needed to learn about the church building process from the ground up.

So, Philip spent his first two internship quarters in church building field construction. In Philip’s words, Homer thought it would be best to “have an appreciation for the difficulties they face in the field, and just understanding that side of it before I began to work on drawings. And that was very wise.” This was also when Philip met David McKnight who would become instrumental in Philip’s future with The McKnight Group.

That’s because one day, when David was visiting the job site, he asked Philip about his plans. Philip told him that there wasn’t room for him to complete his third internship in The McKnight Group architecture office, so he was going to have to find a spot somewhere else. David mentioned this to his dad who opened up a place for Philip. As a result, Philip completed all his internships at The McKnight Group and joined full-time once he finished his degree.

The Pathway to Leadership for Philip Tipton

In this podcast, Philip shares the history of his early employment at The McKnight Group, and how he progressed, how his being an active member of a church helps him understand what a church needs and how those needs can change over time. Learn more about Philip’s journey at The McKnight Group in our Pathways podcast and stay tuned for more 50th anniversary episodes.